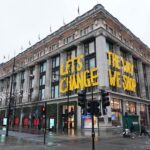 Iconic British department stores like Harrods and Selfridges will see their business rates bills slashed by up to half as a result of the Treasury’s new package of support revealed in yesterday’s Autumn Statement.

As part of the new budget, the Treasury announced a shake-up to business rates which will provide tax boosts for many high street businesses, with large warehouses for online rivals taking on more of the cost.

This could amount to combined savings of around £15 million for Harrods and Selfridges, according to analysis from real estate adviser Altus Group.

It comes as the Government said there would be a revaluation of more than half a million retail properties across England and Wales, meaning the rate of business tax they pay could change.

Furthermore, the Chancellor Jeremy Hunt pledged to remove the downwards cap – meaning businesses who see falling business rates bills as a result of revaluation will benefit from the decrease straight away.

Jerry Schurder, the business rates policy lead at Gerald Eve, told the PA news agency that it is an influential and highly anticipated change for businesses up and down the country.

He said: “In the past, companies whose bills should be going down were not allowed to see those reductions immediately, which businesses have said is very unfair.

“Retail, leisure and hospitality businesses have really struggled since Covid and the transition to online shopping, and they said they should be able to see their bills go down immediately.”

Historic shopping areas are expected to benefit from lower bills.

John Lewis could save almost £5 million and M&S will see around £2.75 million wiped off their bills next year for their Oxford Street stores, Gerald Eve found.

However, some businesses are likely to be disappointed with the new rates they are given, Schurder said, either because their bills have gone up or because they think they haven’t fallen by as much as they should.

“Some businesses will face a major challenge because there is no transparency from the Valuation Office Agency – which is in charge of valuing properties.

“They don’t give you any evidence and the onus is entirely on the business, the rate payer, to prove the agency wrong.

“This is where I think it is unfair, particularly for small businesses where there is not adequate support,” Schurder said.

He added that many businesses will want to appeal the valuation decisions that have been made.

Convenience stores are an exception of the retail sector, as they could face bills increasing by 12.5% next year.

“That must be a reflection of the pandemic,” Schurder said. “Convenience was one of the sectors which boomed during the pandemic; they were essential retail and stayed open, which means their values are going up.”

The same goes for some pharmacies which could see business rates bills surge by about 14%.

Meanwhile, large distribution warehouses could face bills rocketing by more than a third, with the likes of Amazon and DHL facing heftier charges.

This is because the Government said it was addressing the “bricks v clicks” tax imbalance, designed to support bricks and mortar retailers.