Has JD handed the branded fashion sector to Frasers?

Principals of 15 companies are going to have very interesting discussions with Frasers Group in the coming days and weeks.

Whether the chats will lead to investment, expansion, closure, partial closure, name change or disposal is something that has been intriguing a large part of the branded fashion sector since it was revealed on Friday 16 December that JD Group had “divested 15 attractive, but non-core, brands” to its arch-rival Frasers Group for £47.5m.

This early Christmas selection box included a surprising mix of businesses from the long-established and substantial to the little-known and modest in size.

Operating in the designer sector are Cricket, Choice and Giulio. Tessuti, Scotts and Xile are in the premium menswear sector. In kidswear, Base Childrenswear and Kids Cavern are included. Discount websites in the deal are Clothingsites (including Brown Bag Clothing) and Topgrade Sportswear (including Get The Label).

JD had a controlling interest in all the businesses (see table below). 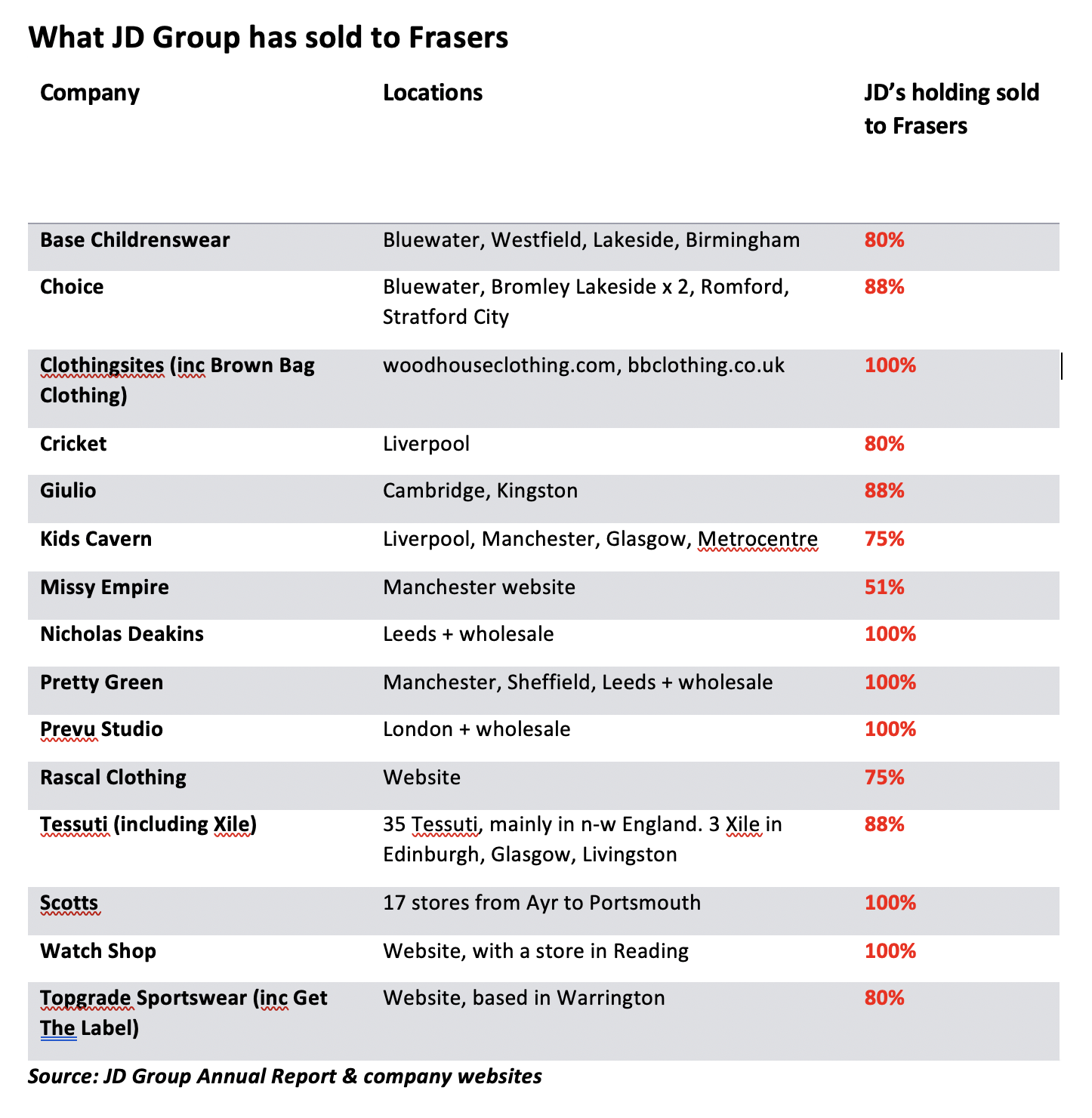 The timing came as a shock – the businesses were told via a group video call on the Friday afternoon, with no prior notice of the subject –  but the transaction was not a total surprise to some of those involved. The deal was sanctioned by JD’s new CEO Régis Schultz, the 48-year-old French businessman who was appointed in September and soon made it clear he intended to concentrate on the group’s core sports fashion businesses.

Schultz, who was CFO at DIY chain B&Q from 2005 to 2008, succeeded Peter Cowgill, the 69-year-old maverick chairman and CEO who from 2004 oversaw the incredible development of the Bury-based “King of Trainers” until he was pressured to step down in May.

For more than a dozen years Cowgill was publicly at loggerheads with Mike Ashley, founder of Sports Direct. Sports Direct developed into today’s Frasers Group and in so doing became JD’s most direct competitor for brands and market share, first in sportswear and then in fashion, especially in menswear.

Each man had been keen to buy controlling stakes in premier independent menswear retailers across the UK.

In theory, Ashley has stepped back from day-to-day involvement in the running of Frasers Group in favour of his son-in-law Michael Murray, who became CEO in May 2022, although this assertion is viewed sceptically by some. What seems clear is this deal would not have happened if Cowgill had still been in charge at JD.

“Ashley has played a brilliant waiting game in this game of fashion chess,” one veteran independent retailer said. “He waited until Cowgill was gone from JD, then clinched the deal. What he is going to do with what he’s bought is the million dollar question. And how will those retailers who have been working with JD Sports like the management style of Frasers is the other key consideration?”

Among the companies now under new ownership, there is acceptance that the deal is just a manifestation of how big PLCs operate.

“This is the sort of thing you have to accept if you take their money,” said one. “We can’t kid ourselves JD or Frasers work like a small independent. It’s just corporate life.”

The general feeling from new Frasers acquisitions is gratitude for how JD had behaved during the relationships, tinged with slight regret that these businesses were very small pieces in a huge machine that has a stock market capitalisation of more than £6bn.

“Everyone I dealt with at JD was very professional and dedicated but at the group the main JD business always takes precedence. If there is a sportswear chain to be bought in Bulgaria or Portugal or wherever, that is always going to get the money before one of us wanting a refit or another store,” one person involved in the deal observed. 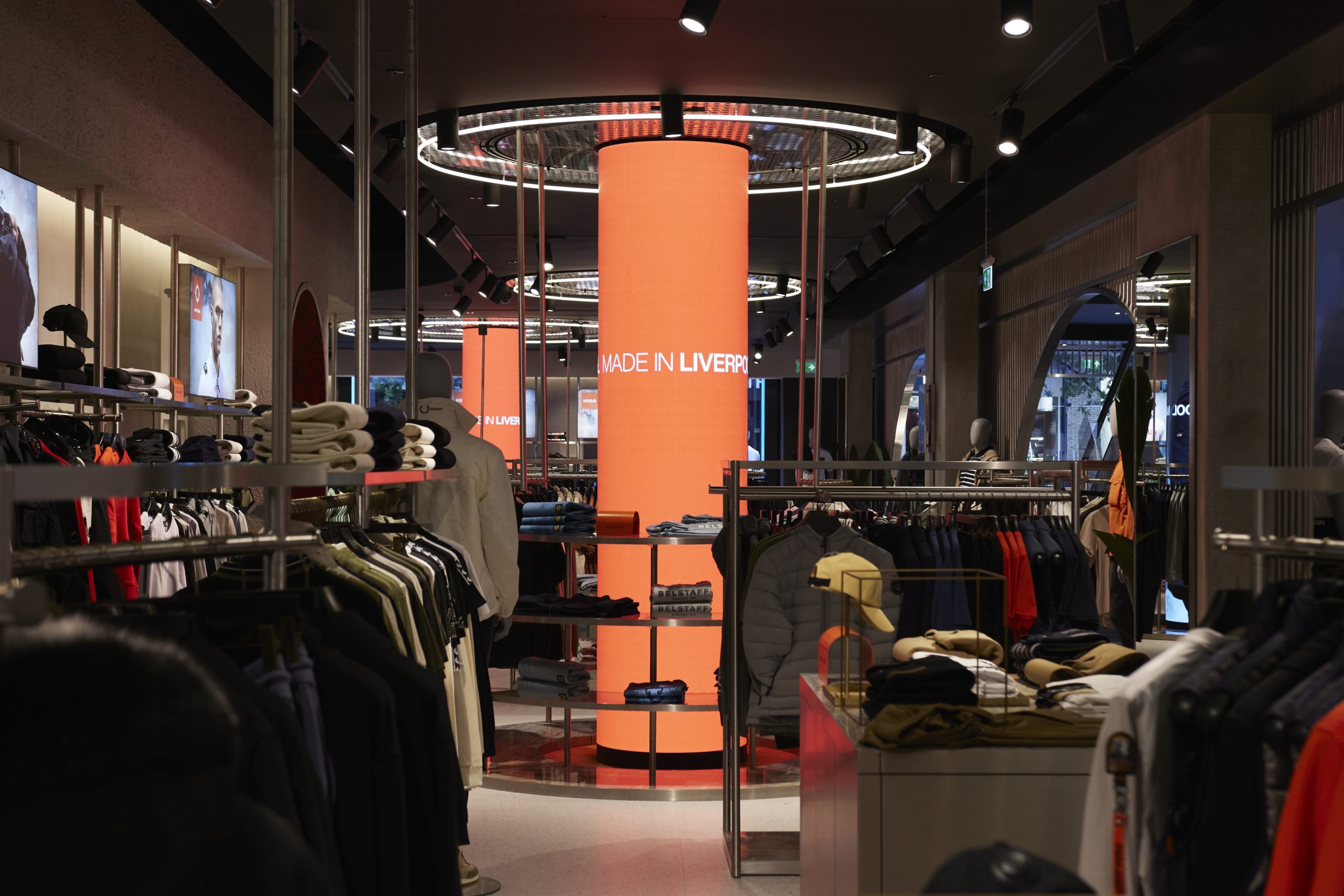 Also some considered Tessuti and Scotts, by far the largest parts of this transaction, were always at the front of the queue as many people working at the chains used to work at JD Sports. “They are even based in the same head office building as JD,” one retailer pointed out.

After a decade and a half of head-to-head animosity between the two bosses, the departure of Cowgill made a different corporate approach highly likely, which is why the disposals did not come as a surprise to some.

“Peter Cowgill liked being in the fashion world. He enjoyed it. Régis Schultz has a background with Kingfisher and B&Q. He is not a fashion guy. He has a habit of staying places just three or four years. He’s been brought in to do a particular job, which is focused on JD’s international business. Little distractions at home in the UK were never going to interest him,” said another retailer.

A few observers think Frasers, whose fast-expanding luxury chain Flannels now has more than 60 stores, might, in fact, prove to be a better partner than the sports fashion-focused JD Group.

Significantly, Schultz has retained a clutch of retail businesses that have strong connections to the specialist trainers and sports fashion sector, including Hip in Leeds, Wellgosh in the Midlands, Manchester-based Oi Polloi and Philip Browne in Norwich, which joined JD only in May this year. 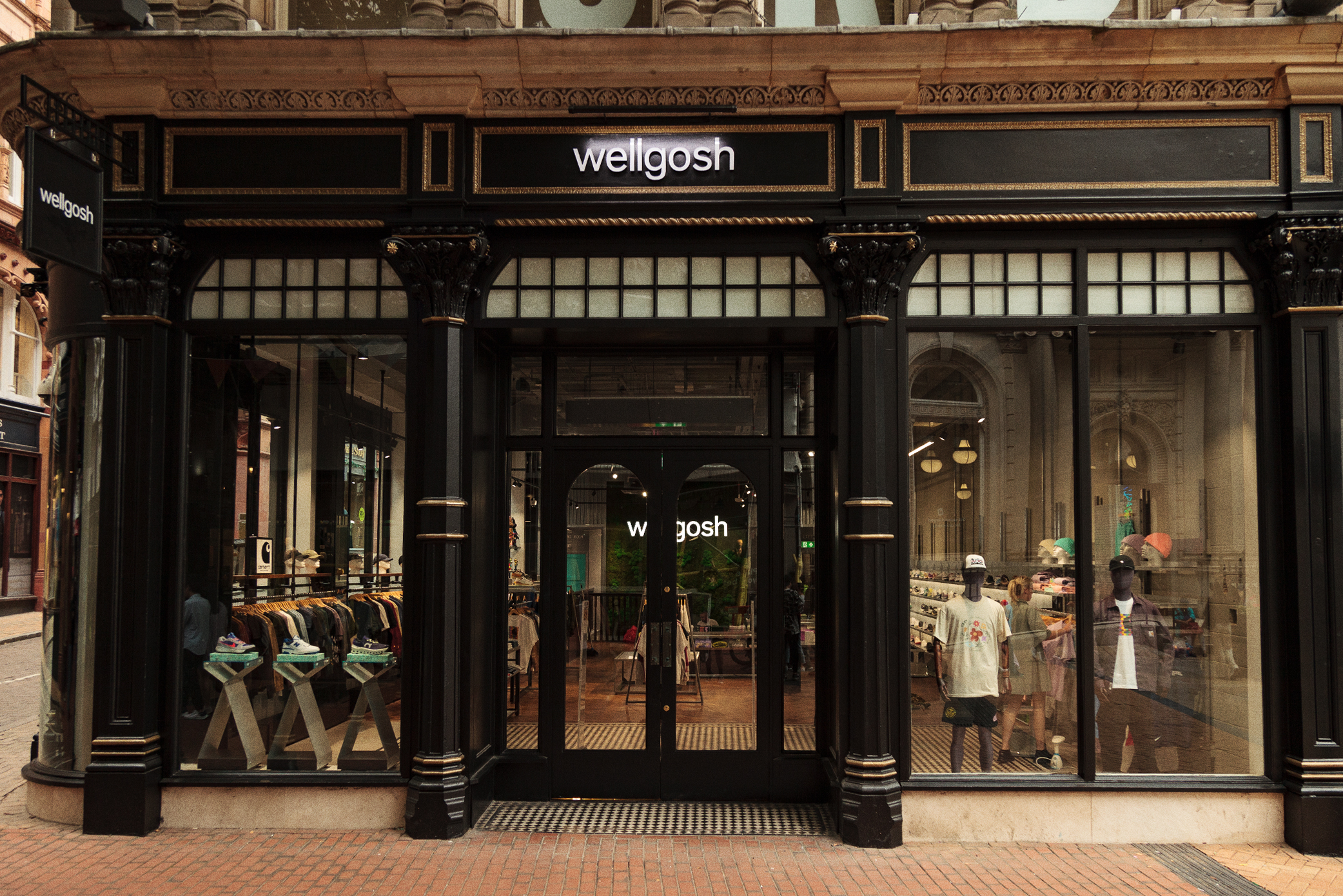 “An obvious question is what will happen to Choice, Giulio and Cricket, which are so obviously in the same luxury sector as Flannels,” mused an experienced retailer who is independent of both groups. “They could continue to run them, but that could be confusing and could compete with any nearby Flannels. They could convert at least some of them into Flannels. They might use one of the names to create another chain slightly below Flannels and above USC, or they could reposition Tessuti to do that.

“What should not be forgotten is that in this deal Frasers has acquired some very talented people in the companies and they might want to call on some of their expertise. It’s wrong to generalise, but often the buying of luxury brands for Flannels is a bit simplistic – they seem just to have the top 10 styles of a collection – while the selection in the independents is much more interesting and less obvious. Frasers might be smart to keep some of that talent.”

There is precedence for such a development. After buying premium business Psyche in Middlesbrough two years ago and converting it into a Flannels, Frasers hired founder Steve Cochrane as head of kidswear, an area the group is keen to grow rapidly. How Base Childrenswear in the south-east and Kids Cavern in the north will fit into this strategy will keep the kidswear sector engrossed in 2023.

Critics of Ashley have long been perplexed by his eagerness to make acquisitions just because they were on the table. Others point out that some of his most high-profile pursuits, such as Debenhams, ended in abject failure, while the jury is still out of others, such as his ownership of House of Fraser.

His severest critics wonder if there was any strategy behind this multipack deal apart from the fact JD was having a clear out. The price of £47.5m is small change to the sprawling Frasers Group, whose total sales were £4.7bn in the year to April 2022. It has a huge range of retail interests from Evans Cycles to Agent Provocateur to fashion chain USC, which has about 140 stores.

JD Group is even bigger, with global sales of around £6.1bn but the value of its shares has dropped around 50% in a year, so Schultz had cause to act fast.

Against figures like these it is important to remember that the 15 acquisitions are small fry and not great performers. Frasers stated in its announcement: Based on their latest filed individual annual accounts, the Businesses had aggregate gross assets of approx. £239 million and profit before tax of approx. £5.3 million.

Interestingly, JD admitted it would have to write off £100m of goodwill due to the disposals, which seems a large sum given the value of the businesses.

So, for some in the industry, the new year brings new ownership and, perhaps, new possibilities. 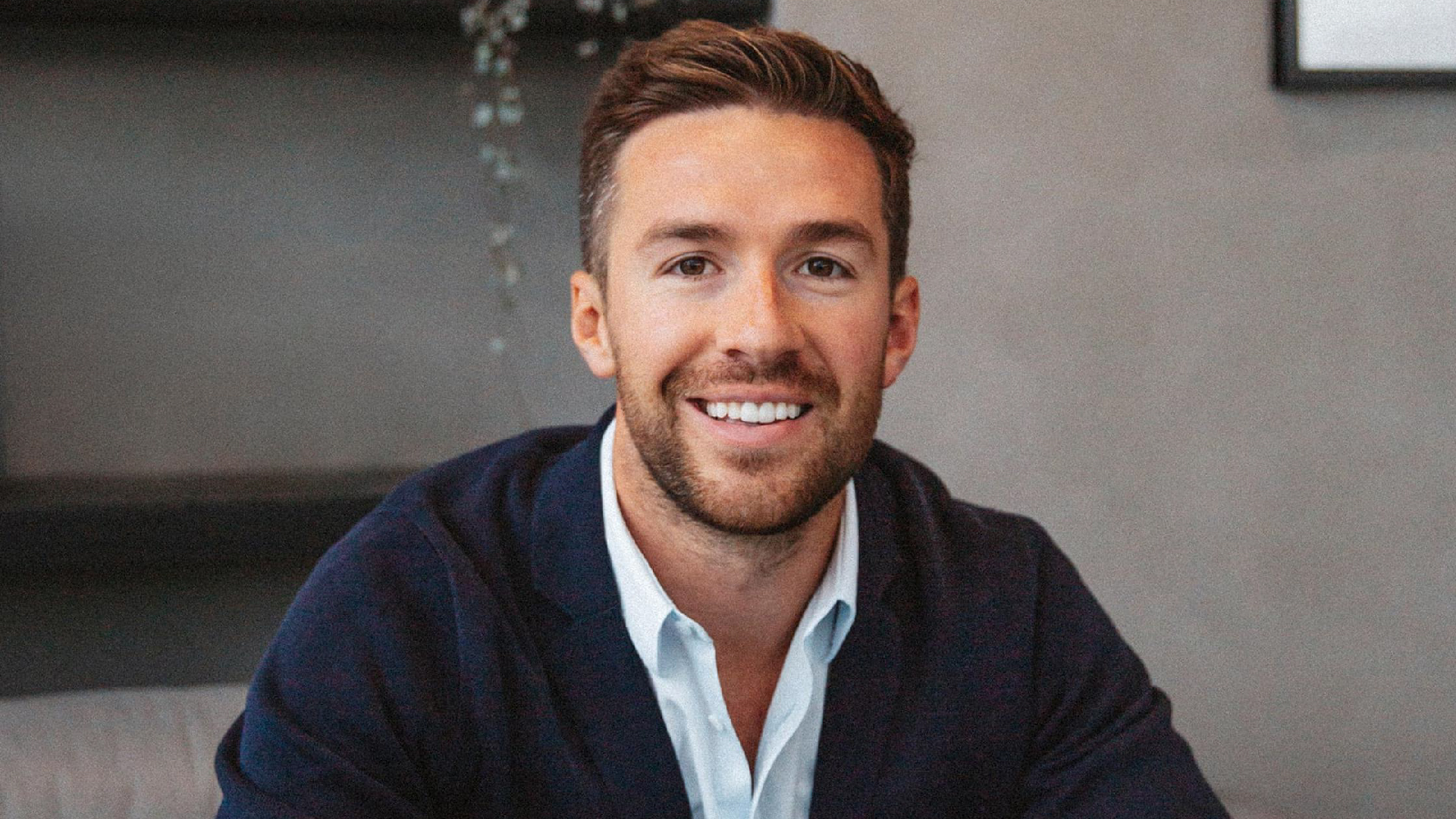 “You never can tell what Ashley is up to but Michael Murray is a very smart operator and I wouldn’t be surprised if he has a plan for most of the acquisitions,” commented an experienced industry figure. “It will be interesting to see just how the top-level sector that Flannels and some of the acquisitions operate in will fare in 2023 when the cost of living crisis really begins to bite. Some clothing and footwear has become ridiculously expensive and that surely can’t continue at the same rate.”

A further complication in this development is the reaction of certain brands to the news that Frasers is now the dominant operator in the premium and luxury sectors, with very few competitors beyond the top department stores and a select few websites.

Some independent store owners fear Frasers will use its muscle to claim a monopoly, stopping brands supplying other retailers. Although that may be difficult legally, in practice it could happen.

The bold and optimistic see an opportunity for indies. “Flannels and Co can have all the big brands. I’ll do what I’ve always done and find some new up and coming brands to serve my consumers,” declared a retailer who has resisted approaches from JD and Frasers. “It’s what a good retailer should be doing.” 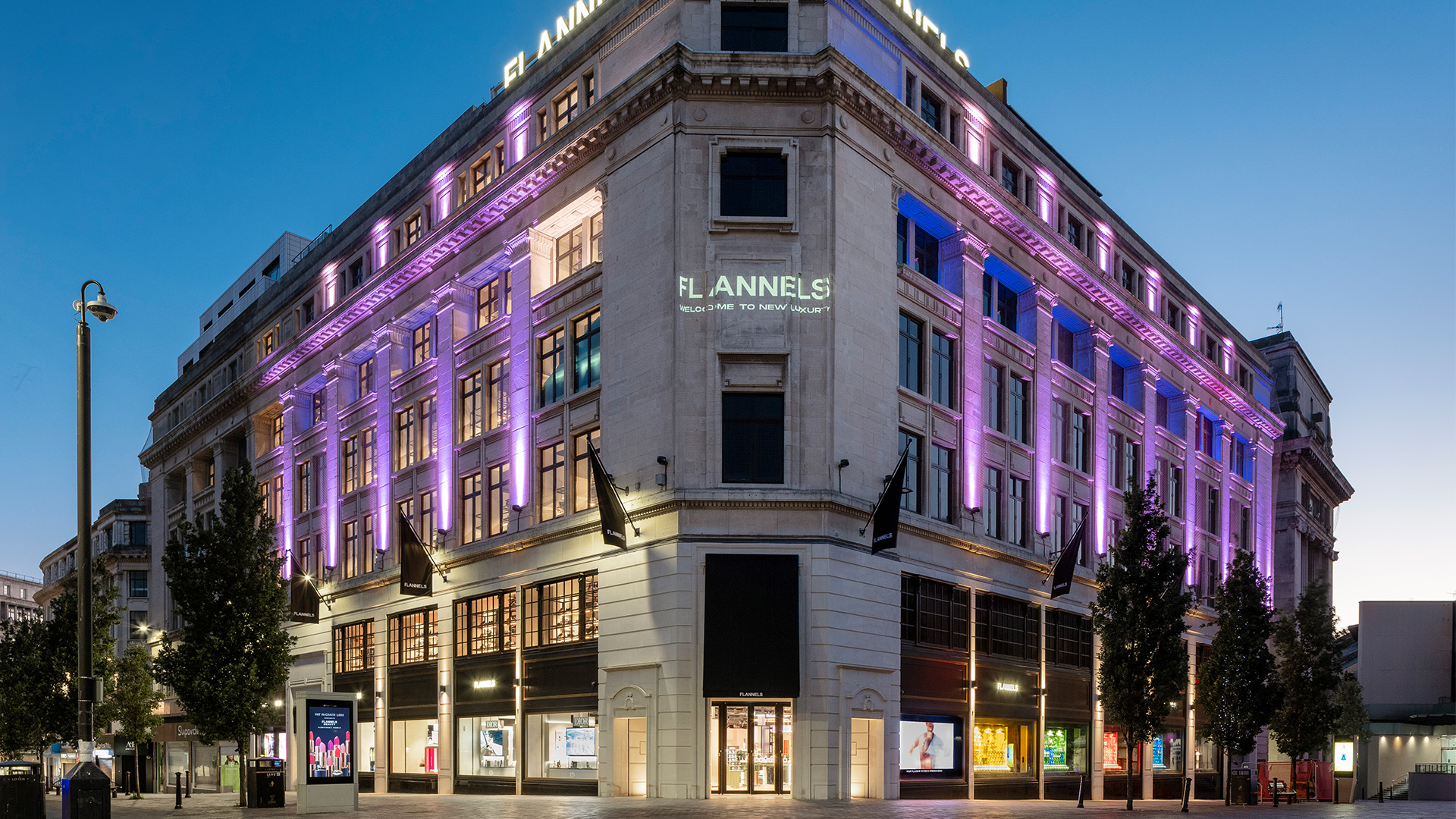 And finally, who got the better part of this deal? For some, JD jettisoning a mixed bag of often small interests to focus on sports fashion and trainers, especially given its very close ties with premier brands like Nike and Adidas, makes perfect sense.

For others, to effectively hand over the “real” fashion sector to Frasers is a mistake.

Could it be that for some of these 15 businesses little will change? Will this be a case of “here comes the new boss, same as the old boss”?

As ever, consumers will decide who is the better retailer. Even before it has started, 2023 is looking to be a pivotal year in UK branded fashion.

Main image: Tessuti at Liverpool One